You are here: Home / Smart Phone Tips / Q&A: How do you restart a frozen iPhone?
439
SHARES
ShareTweetSubscribe 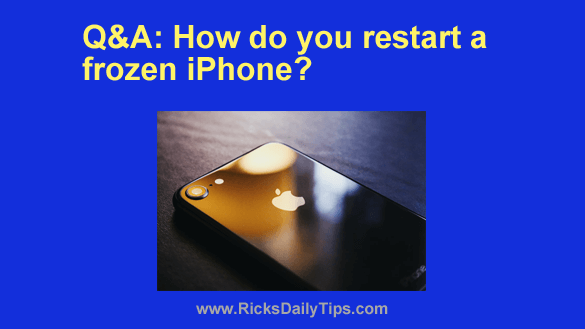 Question from Joanie:  I got my first iPhone a few weeks ago. It’s a used one that my sister gave me after she bought a new one.

It seems to be ok but last night it froze up on me. I couldn’t figure out how to restart it like I could with my previous Android phones.

The battery was pretty low so I ended up just letting the battery die on it.

I turned it on after the battery finished charging and it seems to be working ok now.

My question is, how can I make it restart if this ever happens again? I’ve heard that it’s bad to let a phone battery die completely.

Rick’s answer:  I’ll be glad to help you with this, Joanie.

For the most part, iPhones tend to be fairly reliable and stable devices, but as you’ve discovered they can still freeze up and become unresponsive at times.

Luckily, Apple has provided a way to “Force Restart” a frozen iPhone with just a few button presses.

While this procedure doesn’t work 100% of the time, the occasions when it doesn’t are almost as rare as sunbathers on the icy coasts of the Arctic.

You didn’t mention which model of iPhone you have so I’ll provide instructions for all the most recent models. Just follow the steps below that apply to the model you have.

1 – Press and then quickly release the Volume Up button.

2 – Press and quickly release the Volume Down button.

3 – Press and hold the Side button (the button on the right side of the phone) until the Apple logo appears, then release the button.

1 – Press and hold the Volume Down button and the Sleep/Wake button at the same time.

2 – Release both buttons after the Apple logo appears.

1 – Press and hold the Sleep/Wake button and the Home button at the same time.

2 – Release both buttons after the Apple logo appears.

That’s all there is to it. Your iPhone should now be in the process of restarting.

If for some reason the above procedure doesn’t work, that’s likely an indication that your phone has a serious issue that needs to be addressed either by contacting Apple Support or by taking advantage of one of the options on this page.