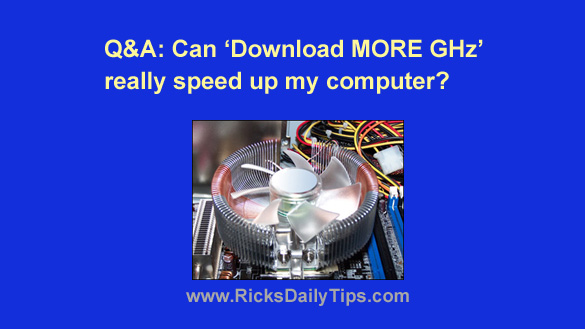 Question from Sue:  This morning someone told me about a website called Download MORE GHz that claims to speed up your computer by making the CPU run faster.

I Googled it and checked out the website, and they have a good sales pitch (even though the service is supposedly free).

The problem is I’ve learned to be skeptical about things like this on the Internet.

I was wondering if you recommend them or not. Any guidance would be much appreciated.

Rick’s answer:  You’re wise to be skeptical about things like this, Sue. The old adage “If it sounds too good to be true, it probably is” is more true than ever in the Internet age.

I had never heard of Download MORE GHz before I received your email, but I too Googled the website and checked it out.

I won’t link to the site from this post because it appears to be a massive scam.

In a nutshell, they claim to be able to “replace” the CPU instruction set (i.e. microcode) contained within the CPU with more up-to-date, better optimized code that will make your CPU operate faster and more efficiently.

Truth be told, it’s quite doubtful that a third-party website is going to be able to come up with a CPU instruction set that’s better optimized (and hence faster) than the company that designed and built the CPU in the first place.

That being said, even if they could produce better code than the code provided by the manufacturer, it would be impossible to “replace” the instruction set contained within the CPU chip.

Instead, the “new” code would have to be downloaded to your computer as an add-on, which would actually slow the system down, not speed it up.

Bottom line: The only way to speed up any CPU is to increase the clock speed that’s fed into it (a potentially dangerous process commonly referred to as over-clocking).

Adding “optimized” code to your system can do nothing whatsoever to speed up the CPU. It just can’t. I strongly recommend that you take a pass on this supposedly great deal.