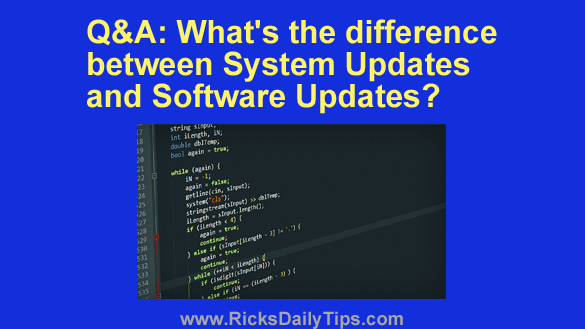 Question from Mike:  Can you explain the difference between ‘System Updates’ and ‘Software Updates’?

Rick’s answer:  I’ll be happy to do my best, Mike. Thanks for asking.

In a macro sense, both of those types of updates are ‘software updates’ since its code to some body of software that’s being updated.

However, there are indeed differences between the two from a general usage perspective.

The term ‘System Updates’ generally refers to updates that are applied to a device’s operating system and any underlying software that supports it (drivers, for example).

Although it isn’t a perfect description, it’s generally safe to consider an update to any piece of software that came preinstalled on your device and over which you have little to no direct control a System Update.

The term ‘Software Updates’ generally refers to updates that are applied to optional programs and apps that you installed yourself.

I’m talking about everything from office suites to photo editors to third-party web browsers, and more.

In a nutshell, updates to any software that wasn’t already on your device when you bought it but was installed later are considered software updates.

And now, to muddy the water a bit…

Some types of software can receive both System Updates and Software Updates.

For example, Microsoft’s Edge browser on a Windows PC is actually considered a component of Windows, and it actually comes pre-installed on a Windows 10/11 PC from the factory as such.

Most updates to Edge are initiated right in the browser just like the updates for Firefox, Opera and other third-party browsers.

Those browser-initiated updates are installed separate from the Windows Updates that are periodically “pushed out” to Windows machines, thus making them Software Updates instead of System Updates.

However, there are other (typically more important) updates to Edge that are distributed and installed along with the regular Windows Update releases. That means those updates are considered to be System Updates.

But guess what? Microsoft also allows you to install their Edge browser on Macs, iPhones, iPads and Android devices as third-party apps.

When those third-party Edge apps are updated those updates are always Software Updates, never System Updates.

All updates to any body of software code are by definition ‘software updates’.

But from a general use perspective, the term ‘System Updates’ generally refers to updates applied to a device’s operating system and all of the underlying support software that came preinstalled along with it.

The term ‘Software Updates’ generally refers to updates applied to user-installed programs and apps that didn’t come preinstalled on a device from the factory.

I hope this helps, Mike. Thanks again for asking!