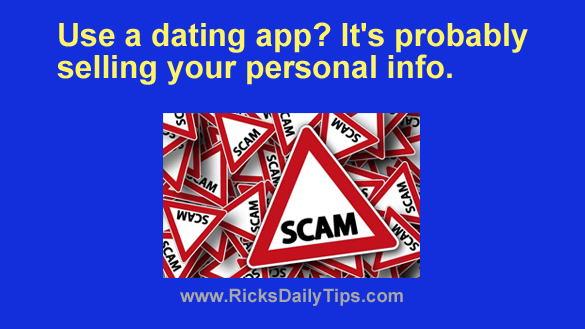 Do you use a dating app on your phone or tablet?

If so, it’s probably selling or otherwise sharing your personal info with dozens of other companies.

According to this ABC News report from 2020, the Norwegian Consumer Council has discovered that “serious privacy infringements” are being perpetrated by the companies behind several of the world’s most popular dating apps.

And guess what? Many dating apps are still doing it.

In short, the apps are selling or otherwise sharing the personal info from user accounts with at least 135 other third-party companies and services.

Most of the information being sold and shared can’t be used to identify individual users, but it’s still sensitive info nonetheless.

While the data collection and sharing practices used by these apps are still legal for the time being in the United States, they do violate several European privacy laws.

Bottom line: If you use one or more of the apps mentioned above you should carefully review those apps’ Terms and Conditions and Privacy Statements to make sure you understand exactly what types of information the apps are collecting and which third parties they are sharing it with.

You’ll then be in a position to make an informed choice about whether to keep using those apps or not.

Note: As mentioned above, the companies behind these apps are apparently not breaking any U.S. laws at present, but they are in violation of several European privacy laws. That’s why I decided to file this post in the “Scam Alerts” category.