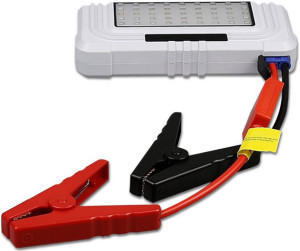 I review a lot of products on my blogs, and it isn’t often that an item makes me say “WOW!!!”

Well, let me take a few moments to tell you about one that did.

I can easily hold this thing in my open hand, yet it packs more than enough power to jump start most any car on the road today.

In fact, according the the manufacturer it can provide up to 20 jump starts before it has to be plugged into an electrical outlet for re-charging.

The first time I read that, I was skeptical. But after trying it out for myself I absolutely believe it to be true.

This is how I tested the Coolreall Box 21 Jump Starter…

First, I unpacked everything from the small shipping box. The device and all its many accessories arrived already stowed away in their own sturdy and compact case. After taking everything out of the case and laying them on my desk, I was amazed at how much stuff they managed to fit inside there.

Check out this photo from Coolreall: 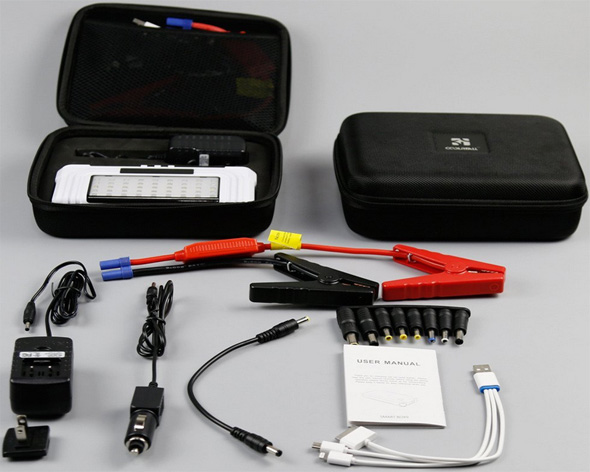 I won’t go into all the things this little gem can do (like charging smart phones, tablets and such) because it’s primarily a jump starter for cars with dead batteries. And I can tell you that it does that quite well.

The jump-starter’s battery arrived fully charged so I was able to start testing it right away. A quick glance at the instruction manual showed me how to connect the battery cables so I plugged them in and got right to it.

The first test I performed was jumping off a 2005 Malibu Maxx 6 cylinder vehicle that had been sitting for 8 months. The battery was completely dead.

I raised the Malibu’s hood and connected the clamps to the battery terminals, then got inside the car and turned the key. It easily turned the engine over, and after about 10 seconds or so the car started right up.

I got out of the car and disconnected the clamps from the battery. I let the car run for about a minute, then turned the key to stop the engine. I tried starting the car again with just the battery, and it was so dead that it wouldn’t even “ding” the “door open” chime.

I connected the jump starter again, and once again the car started right up. I repeated this process four more times, and the engine turned quickly and started up every time.

I wanted to perform a more demanding test, so I took the Coolreall jump starter over to my brother’s farm and used it to attempt to start one of his farm tractors. Now this tractor didn’t just have a dead battery. It had no battery on it at all!

I removed the tarp from the tractor and connected the clamps from the jump starter to the dangling battery cables, then turned the key. The engine quickly turned over numerous times, but it didn’t start.

My brother told me that the tractor had engine problems, but it was obvious that had it been in working order the tractor would have started right up because the engine was turning over very quickly.

As a final test I returned home and used the jump starter to start the Malibu Maxx three more times. By then the unit had only 3 of the 4 LED’s glowing that indicate how much charge was left in the battery, but it still turned the Malibu’s engine just as quickly as it did the first time.

Based up on my tests, I found this to be a fantastic product, and well worth the cost. There are a couple of things that could be a little better however…

First, the cables that lead from the jump starter to the battery clamps are a little shorter than I would like. But I guess they had to keep them short in order to prevent them from over-heating from the heavy starting current supplied during jump-starting.

And second, the AC adapter that charges the jump-starter’s battery comes in two pieces that must be snapped together before you can use it to charge the device’s battery. I found it difficult to get them to snap together properly, but once they finally did it worked flawlessly.

Bottom line: I’m simply amazed at how much power the folks at Coolreall managed to pack into such a small and light package! The Coolreall Box 21 Jump Starter greatly exceeded my most optimistic expectations. I plan to keep this little jewel stowed away in my trunk for those times when I need to jump off someone’s car.

And by the way, I did use the device to charge my smart phone and tablet (and it charged them very quickly), but the beauty of this thing lies in it’s ability to start most any car with a dead battery in a flash.