You are here: Home / Tech Questions & Answers / Q&A: Should I buy a laptop with Windows 11 S?
699
SHARES
ShareTweetSubscribe 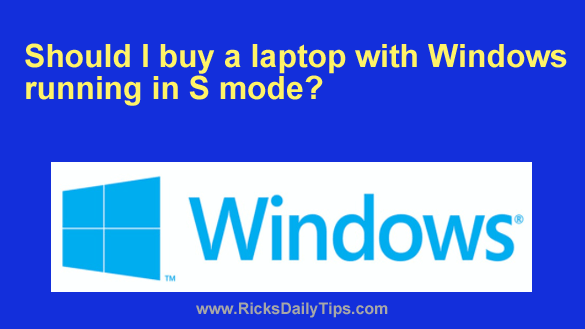 Question from Amber:  I’ve been shopping online for a new laptop and I’ve noticed that a lot of the lowest-priced Windows laptops have Windows 11 S installed on them.

I’d never heard of Windows 11 S before I started shopping for a new laptop. And now I’m really confused.

I have a couple of questions for you:

2 – Is there any reason why I shouldn’t buy a laptop that’s running Windows in S mode (I love the low prices but only if the laptops are good)?

Rick’s answer:  Those are great questions Amber, and I’ve had lots of people asking me about Windows’ S mode of late.

Truth be told, “S” mode is simply Microsoft’s answer to the huge popularity of Chromebooks.

As you might already know, Chromebooks are built from the ground up to be primarily Internet-based machines.

And as such they are typically fast, efficient and secure while requiring less processing power and storage capacity when compared to machines running a full-blown operating system like Windows or macOS.

This streamlined computing experience in a relatively cheap laptop resulted in an explosion of ChromeBook sales, which of course resulted in a corresponding drop in market share for “budget” Windows laptops.

Microsoft’s effort to combat this led them to introduce Windows 10 running in “S” mode, and they have now followed that up with Windows 11 S.

PCs running Windows in S mode are actually running a lean “shell” of Windows without some of Windows’ most resource intensive capabilities and features.

For example, these machines won’t allow you to install Firefox, Opera, Brave or any other third-party web browser. As long as your laptop remains in S mode you’re stuck with Microsoft Edge.

And the limitations don’t stop there. You won’t be allowed to install ANY third-party software that isn’t available for download from the Microsoft Store.

This approach has both advantages and disadvantages…

The biggest advantages are enhanced speed and security:

Since you’re only allowed to install apps that are available in the official Microsoft Store the chances of downloading one that’s infected with malware is extremely low.

And since the apps in the Microsoft Store are usually small (in terms of the number of lines of code used) and efficiently written, they tend to be quite responsive when running on the lower powered machines that Windows S typically comes installed on.

Another advantage is system stability:

All of the apps in the Microsoft Store must meet Microsoft’s standards in regards to stability and compatibility with the Windows 10 operating system, therefore you’re more likely to have a positive user experience.

The biggest disadvantage to Windows in S mode is the lack of choices:

Windows 11 S severely limits your options when it comes to choosing the best software for your particular needs.

As I mentioned above, the only software you’ll be allowed to install is what’s available in the Microsoft Store. And unfortunately the best option is often a third-party app that can’t be downloaded from there.

In a nutshell, you’ll need to weigh the advantages against the disadvantages when trying to decide if a laptop running Windows in S mode is right for you.

If you’re ok with having to choose your software from the limited collection of apps that are available in the Microsoft Store in exchange for being able to pay less for the machine while enjoying a higher level of security, then a laptop running Windows 11 in S mode could well be perfect for you.

However, if flexibility and the widest possible breadth of choices is important to you, I believe you’d be better served by a (slightly) more expensive laptop that’s running a full-blown version of Windows (i.e. Windows 11 Home for example).

Now that I have answered your questions, there’s something else I feel that I should mention…

If you purchase a laptop running Windows in S mode you aren’t necessarily stuck with S mode forever. You will have the option of switching the laptop’s Windows installation out of S mode at any time should you ever desire to do so.

Just be aware that this switch is a one-way process. Once you have switched the machine out of S mode there’s no way to go back, and that’s not good because many PCs that were designed to run Windows 11 in S mode perform poorly after being switched out of it.

For this reason I strongly recommend that you avoid the temptation to buy a Windows 11 S machine with the expectation of being able to switch out of S mode later. That rarely works out to the user’s satisfaction.

I believe it would be to your advantage to you make your decision between Window 11 S and Windows 11 Home BEFORE you make your purchase, not after.

I hope this helps, Amber. Good luck with your new laptop regardless of which way you end up deciding to go!

Update from Amber: Thanks for the awesome (and very thorough) explanation, Rick. I’ve decided to just go ahead and buy a laptop running Windows 11 Home.