You are here: Home / Tech Questions & Answers / Q&A: Why is Chrome using so much of my computer’s RAM?
701
SHARES
ShareTweetSubscribe 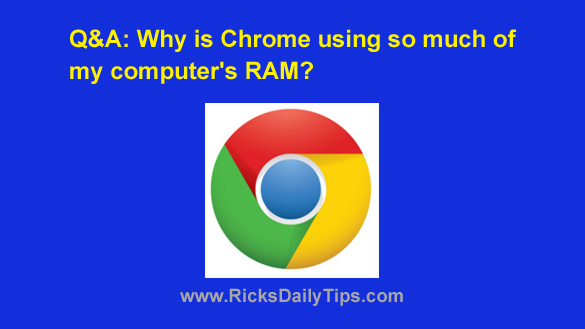 Question from Keith:  Hi Rick. I’m having a computer problem that I hope you can help me fix.

I have a Dell desktop computer that’s running Windows 10 Home.

This machine has 8GB of RAM which seems like it should be plenty, but I’ve started getting frequent “Low Memory” warnings.

When I open the Task Manager I see that there are over two dozen Chrome processes running, and every one of them is using a big chunk of of RAM.

Even if I only have a couple of Chrome tabs open I still see a bunch of Chrome processes eating up lots of RAM! Is this normal? If not, what can I do to fix it?

Rick’s answer:  Keith, in my opinion Chrome is one of the best browsers out there.

But that being said, it really is a memory hog as you have discovered. That isn’t necessarily a bad thing however, and here’s why…

By running every tab, plugin and extension in its own process, if one of them crashes it doesn’t crash the entire system or corrupt the other open Chrome tabs. But all of that beneficial redundancy comes at a huge cost in the form of extensive RAM usage.

There are a couple of other factors involved with Chrome’s heavy memory usage as well, but the ones mentioned above are the big ones.

Normally, Chrome’s excessive use of memory isn’t a problem on systems with 8GB or more of RAM, but if you tend to open a lot of tabs and/or use a lot of plugins and extensions your system can easily run out of free memory.

And if one of your active plugins or extensions has a memory leak, the problem is made even worse.

If I were you I would try to limit the number of Chrome tabs that you keep open at one time and carefully examine the list of plugins and extensions you are using. If you don’t absolutely need a plugin or extension, either disable it or remove it altogether.

If you don’t keep a lot of open tabs or use a lot of extensions, there’s a strong possibility that one or more of the extensions you do use has a memory leak.

If so, you can track down the faulty plugin or extension by disabling all of them and then re-enabling them one by one until your memory usage starts to skyrocket again. The last one you enabled before the memory problem returned is the culprit.

Once you have identified the bad plugin or extension, remove it and either replace it with another one that does the same thing or simply do without it.

And finally, the fact that your computer runs low on RAM even with just a couple of Chrome tabs open indicates that your PC might well be infected with malware. In fact, I think it’s a pretty strong possibility.

I recommend that you run the scans listed in this post to track down and remove any malware that might be present on your system.

Update from Keith: Thanks for your help Rick. You were right about me keeping a lot of open tabs. I usually have around 8 or 9 open at any given time.

I also had nine browser extensions enabled. I removed all but two of the extensions and the memory problem went away.

I ran the malware scans you suggested in that post you linked to but they all came up clean.

Thanks for helping me out. I really appreciate it.