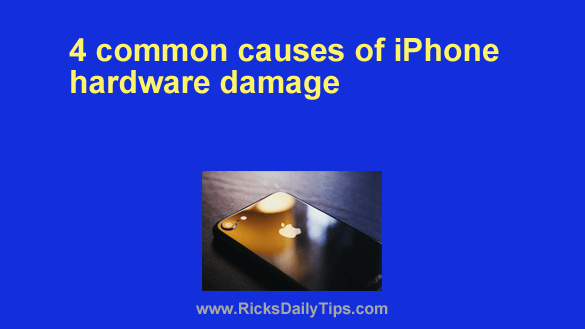 Given how small the iPhone is, its internal components can be particularly vulnerable to damage. In the worst cases, hardware damage on iPhones can cause screen dysfunction, charging problems, unresponsive buttons, and battery failure.

To help you take care of your iPhone, I’ve listed four of the most common causes of hardware damage – and how to prevent them.

Apple assures that all of the iPhone models from the iPhone 8 onwards have been constructed with durable glass. Still, iPhones might sustain damage from intense physical impacts, such as accidental drops. Falls from distances over 5 feet may cause the phone’s glass to shatter, making the screen unusable.

Additionally, instances of physical impact can damage the phone’s interior components, which will reduce its functionality. Damage from physical impact is usually difficult to repair at home, which means you may need to have it sent to a repair shop or have its parts replaced.

To avoid this kind of damage, protect your phone with a durable non-slip case. You can also add a strap to ensure the phone doesn’t fall out of your wrist while you’re holding it.

As much as possible, use both hands while using your phone. When not in use, store your phone in a place where it’s safe, such as a zippered pocket, bag, or purse.

If your phone falls into any liquid, grab it immediately. Turn the device off as soon as you can to prevent the water from shorting the phone’s internal components. Clean your phone, then leave it somewhere safe to dry it off.

Though it may be tempting to use a freezer, blow dryer, or oven to quicken the drying process, subjecting your phone to heat or cold may worsen the internal damage.

Dry the device’s internal components by burying your phone in a bowl of uncooked rice. The rice will absorb the moisture within your phone, thus protecting it from additional water damage.

Once you’ve followed all these steps, turn your phone on and test it. Though some phones may work at first, it’s also possible for the water to have eroded your phone’s internal components. In this case, it’s best to send it out for repairs.

Overworking our phones can do significant damage to their hardware. Because iPhones are relatively small devices, they come with small circuit boards. These circuit boards have a limit to their power integrity, which means that they’re only capable of conducting a certain amount of electricity.

When we overwork our phones, we’re asking them to conduct more electricity than their circuit boards can handle, which causes them to overheat. Therefore, we need to make sure that we’re not overworking or overcharging our phones.

Heavy games that consume a lot of battery tend to cause overheating, which leads to circuit board damage. The same happens when you leave too many apps running in the background. You can also update your phone and apps to make sure you’re using the most efficient possible software.

When dust and debris accumulate inside your phone, they can impair connections between internal components.

Blocked connections can make your phone’s internal components slow or unable to execute the operations needed to get your phone to function. Therefore, it’s important to keep your phone clean.

Turn off and unplug your phone before cleaning it. Apple recommends using a soft, lint-free cloth to wipe your device. Try to carve out time for cleaning several times within the year to prevent dirt accumulation.