You are here: Home / Tech Questions & Answers / Q&A: How do I remove the PIN from my Android phone?
950
SHARES
ShareTweetSubscribe 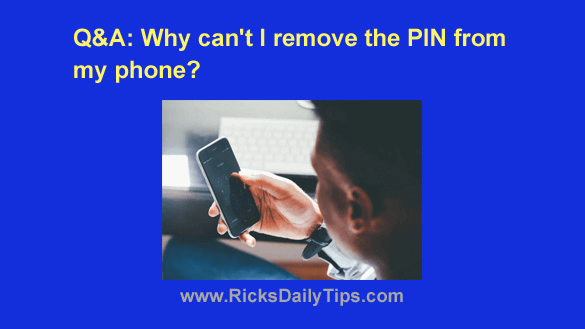 Question from Angie:  I started dating a guy a few months ago. I really liked him but he had an annoying habit of picking up my phone and looking at my called logs.

I think he was checking up on me to see if I was calling other guys. I didn’t like him spying on me that way and I told him so, but he kept on doing it.

I finally put a PIN on my phone so he wouldn’t be able to get into it.

We recently broke up so I no longer need the PIN. The problem is it won’t let me remove it (that option is grayed out).

What do I need to do to remove the PIN from my phone? It’s an Android phone from Straight Talk).

Rick’s answer:  Angie, this is a fairly common issue with Android phones in general, and it seems to afflict Straight Talk users more than others for some reason. Luckily, it’s almost always pretty easy to fix.

But before we get to the steps required to remove the PIN, I really feel the need to urge you to reconsider your decision to remove it.

While it’s true that you no longer need the PIN to protect your privacy from your intrusive ex, there are other reasons why you might want to consider keeping it.

The obvious example is what could happen if you lose your phone and someone else happens to find it.

Or what if it simply gets stolen?

In either of those cases, having a PIN enabled on your phone would prevent whoever manages to take possession of it from being able to make illicit use of the phone and all the personal and financial info that you might have stored on it.

Now that we have that out of the way, if you still wish to remove the PIN from your phone here’s the info you’ll need to get it done…

First of all, if your phone is encrypted you’ll need to turn off the encryption in the Settings app before you’ll be able to remove the PIN. After all, encryption would be pretty much useless if someone could gain access to the phone without having to get past some sort of security scheme.

But if all you did was put a PIN on your phone without enabling encryption, that’s probably not what’s preventing you from removing the PIN.

Another possible cause of this issue is having a Virtual Private Network (VPN) enabled. Any time a VPN is enabled on an Android phone the user must also enable a “secure lock” method such as a PIN or Lock Screen Pattern.

If that were the case you would have to disable the VPN before you’d be allowed to remove the PIN.

Again, that’s probably not what’s causing the issue in your case since you enabled the PIN to keep your ex from accessing the phone instead of for the purpose of setting up a VPN.

That leaves just one likely possibility: Your phone could be storing one or more security certificates that’s preventing you from removing your PIN. I recommend that you clear them and see if that resolves the issue. Here’s how:

Note: The exact steps required to “clear credentials” vary just a bit from phone to phone, but the procedure below should be fairly close to what’s required for your phone.

2 – Scroll down and tap Security.

3 – Scroll down and tap Advanced.

4 – Scroll down and tap Encryption & Credentials.

6 – Exit the Settings app and then restart your phone.

That’s all there is to it. If all is well you should now be able to remove the PIN from your Android phone. If not, let me know and I’ll tell you what to try next.

Update from Angie:  After I cleared the credentials and restarted the phone I was able to remove the PIN. And then I re-enabled it based on your recommendation.

Thanks for your help. I’ll sure be spreading the word about your awesome site!!!