You are here: Home / Tech Questions & Answers / Q&A: Can a phone catch a virus from an infected email?
1.7k
SHARES
ShareTweetSubscribe 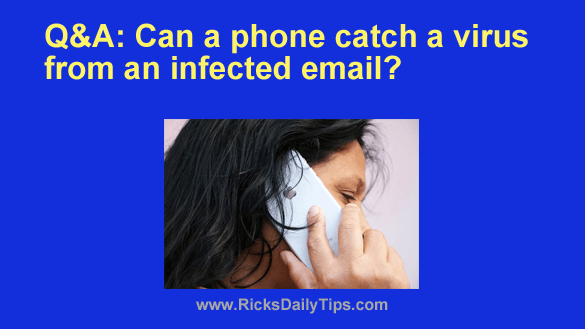 Question from Theresa:  Rick, I was wondering if it’s possible for an infected email to load a virus onto a smartphone?

Last night I was using my iPhone to check my email and I accidentally opened an email that appeared to be from China while I was trying to delete it. When the email opened up it said it was downloading a file.

I haven’t noticed any problems with the phone so far. I’m cautiously optimistic because I’ve always been told that only Windows computers are subject to virus infections.

Do you think I have anything to worry about? Thanks in advance for your answer!

Rick’s answer:  Theresa, whoever told you that only Windows PCs are subject to virus infections is incorrect. Any device that downloads and executes program code is capable of “catching” a virus. and I do mean ANY device.

That being said, I seriously doubt that the rogue email that downloaded a file to your iPhone infected it, even if the file did in fact contain a virus.

Apple has designed iOS (the operating system that runs on your iPhone) to be very resistant to viruses and other forms of malware. That’s why you don’t really need to run an antivirus app on it. You can read more about that right here.

Is it possible for an iPhone to catch a virus? As I mentioned above, the answer is yes. But it’s extremely unlikely in my humble opinion.

And here’s something else to consider: Most hackers are still aiming their malicious code directly at Windows machines and Android devices simply because there are so many of them in existence today.

With the proliferation of smart phones and tablets, more malware is being aimed at mobile devices every day, but most of their targets are Android-based.

Android devices are much more susceptible to malware than iPhones because Android is a more open (and therefore more vulnerable) operating system than Apple’s iOS.

That’s why I recommend that you install a quality antivirus app on your Android devices. While there are several good ones to choose from, I recommend installing AVG for Android because it has worked extremely well for me over the years.

Bottom line: While it’s possible (or actually, pretty likely) that the file the rogue email downloaded to your phone contains malware of some sort, I seriously doubt that it will do any harm to your iPhone.

Had you been using an Android phone instead I would give you a very different answer.

Bonus tip: This post explains how to completely rid a Windows PC of malware, step-by-step.