You are here: Home / Computer Tips / 5 tips for buying the best computer for your needs (without paying for features you don’t need)
1.2k
SHARES
ShareTweetSubscribe 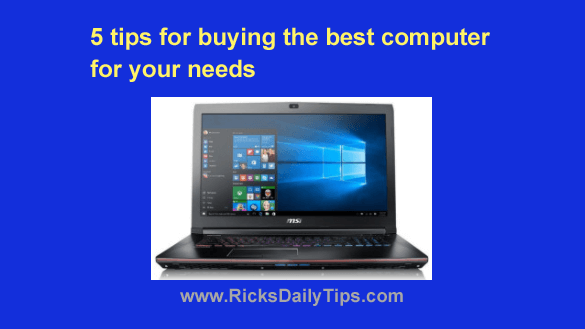 There was a time when it made sense to buy the most powerful computer you could afford.

Back then, advances in software often made computer hardware obsolete long before a component failed, but that’s typically not the case anymore.

Not all that long ago, even an entry-level laptop would cost you upwards of a thousand bucks. And if you bought one of the cheaper models you could count on it becoming obsolete in just a year or two.

That’s why it made sense back then to buy a model that was actually more powerful than what you needed at the time. But that’s no longer the case.

Even low-cost “entry level” computers are now capable of running most common software packages without you noticing a slow-down in performance.

While it’s true that hard-core gamers and folks who do a lot of video editing and other CPU, memory and video intensive tasks need plenty of horsepower inside their PC’s case, most of us do not.

The truth is most current computer models come loaded with plenty of CPU power, RAM and hard drive space for everyday tasks such as web browsing, checking email, interacting with social media and watching streaming video.

If you go into a computer store and ask for advice on what to buy, the salesperson is likely to try to talk you into buying more computer than you really need.

This is especially true if the sales staff works on a commission basis. Don’t fall for the sales hype!

If you’re looking for a new computer, here are a few tips for saving money by buying the right amount of computing power for your needs:

1 – You probably don’t need a computer with 16 GB (or more) of RAM. Windows 11 runs just fine on a machine with 8 GB for most common tasks.

In fact, you can probably get by just fine with 4 GB if all you need is a good Internet machine.

2 – You probably don’t need a computer with a CPU that has more than 4 cores. In fact, for everyday computing and Internet use a dual core machine will do fine.

Extra cores might come in handy some day when most software is written to take advantage of them, but today anything more than 4 cores is overkill unless you plan to run one of the few programs that are currently written to effectively use the extra cores.

3 – You don’t need to pay a premium for a computer with just a few extra Megahertz of CPU speed. Back in the day, the faster the CPU the better, but the most common bottlenecks in modern computers are completely independent from the CPU’s clock speed.

4 – You also don’t need to be too concerned with the size of the hard drive. Of course the larger the hard drive, the more music, photos, Word documents and other files that it can hold.

But that being said, these days most entry-level PCs come with 1TB hard drives, and that’s enough space to hold a ton of stuff. What’s more, you can always add more storage if and when the need arises by simply plugging in an inexpensive USB hard drive or SSD.

5 – Speaking of storage, if given a choice between a large hard drive and a smaller SSD for about the same money, I recommend choosing the machine that has an SSD.

Many computers now come with 256GB of solid state storage instead of a larger hard drive. In my opinion that trade-off is well worth it.

A 256GB SSD is plenty large enough to hold a typical Windows 11 installation plus a number of average size programs. You can always add an inexpensive external USB hard drive or external SSD for additional storage if you need it.

All of the above being said, the bare minimum amount of internal storage you should accept in a new computer is 128GB, even if that storage is an SSD.

Anything less than 128GB and you’re likely to run into some problems, especially when it comes to installing major updates to Windows.

Bottom line: Modern computers (both laptops and desktops) have become relatively inexpensive commodities are are typically over-powered for all but the most demanding applications.

Therefore, I recommend buying only the amount of computing power that you really need and spending the money you save on something that really matters to you!

Amazon has a full line of laptop and desktop computers that can perfectly match your needs – and your budget!