You are here: Home / Computer Tips / 4 computer upgrades that I strongly recommend (and 3 you should probably skip)
2.1k
SHARES
ShareTweetSubscribe 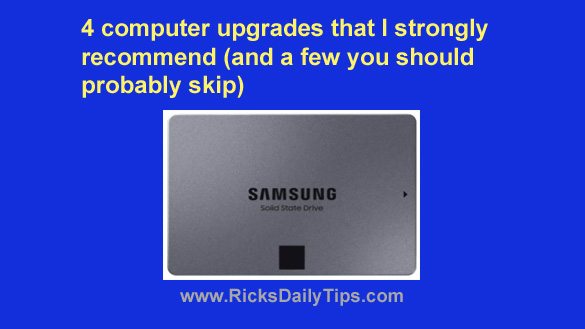 There was a time when most any upgrade you could make to a computer would pay great dividends in increased speed and/or enhanced capabilities.

But times have changed, and some once-popular upgrades that were no-brainers back in the day no longer provide enough “bang for the buck” to make them worthwhile.

With that in mind, here are three computer upgrades that I no longer recommend for the average computer user:

1 – Upgrading to a new Motherboard and CPU

– In the early days of personal computing, one of most effective ways to speed up almost any PC was to replace the existing motherboard and/or CPU with a faster, more capable model.

Back then a new PC could easily set you back $1,500 or more, so spending $100 to double the effective system speed was truly was a no-brainer.

But that is no longer the case. Today you can buy a brand new PC that’ll probably run rings around your old one for as little as $300, so spending $200 or more on a new motherboard and CPU is one of the worst deals one can make, especially if you would need to replace the RAM in order to make it all work (and you probably would).

– If you primarily use your computer to visit websites, check your email, chat with friends, interact with Facebook and other social media sites, use Microsoft Office or watch online videos, the video card that’s already inside your PC is almost certainly more than powerful enough to perform those tasks with ease.

For those tasks upgrading to a new video card is unlikely to make any noticeable difference whatsoever.

That being said, if you play graphics-intensive games or want to connect an extra monitor or two, adding a faster video card or one that supports multiple monitors can be a good move.

– Like the floppy disk drive before it, the optical drive is headed for extinction

Thanks to the popularity of streaming audio and video, the move from disc-based software distribution to instant downloads and the proliferation of spacious USB flash drives, optical drives are becoming less necessary every day.

As a result, many new computers are being shipped without internal optical drives these days.

If you still find yourself needing to use an optical drive on occasion, instead of upgrading your computer’s internal optical drive to a newer and faster model or replacing a defective one, I strongly recommend opting for an external USB 3.0 optical drive

Now that we have discussed three upgrades that no longer really make sense, lets talk about four that do:

– These days 4GB of RAM is really the base amount you should have in your Windows PC.

And 8GB is even better.

If your machine doesn’t have at least 4GB of RAM I strongly recommend that you spend a few bucks to make the upgrade. You won’t regret it.

2 – Replacing the Primary (Boot) Hard Drive with an SSD

– Replacing your computer’s hard drive with a super-fast Solid State Drive (SSD) is the one of the best upgrades you can make to your computer.

While adding RAM will usually make most any PC run faster, upgrading to an SSD will put it on virtual steroids! If you can only afford to make one upgrade to your computer, adding an SSD should be your number one choice.

– Moving up from USB 2.0 to USB 3.0 will provide almost as much “WOW” factor as upgrading from a spinning hard drive to an SSD.

If you use an external USB hard drive or optical drive with your computer, you’ll kick yourself if you fail to upgrade to USB 3.0 and find out what you’ve been missing later.

4 – Replacing an older router with a modern AC Wireless router

– While this isn’t an upgrade to your computer per se, if you stream video from the Internet, visit media-intensive websites, and/or have several simultaneous Wi-Fi users on your local network, upgrading to a state-of-the-art AC wireless router will make your computers and mobile devices feel instantly “upgraded”.

Also, a new router will be virtually guaranteed to support the latest encryption standards, and enabling the strongest encryption method possible is the best way to protect your local Wi-Fi network (and your sensitive information) from hackers.

Important: Your devices must be equipped with AC wireless adapters

in order to take advantage of the much-faster AC Wi-Fi speed provided by your new AC wireless router. Luckily, they are quite inexpensive these days.

Bottom line: Knowing which computer upgrades make sense and which ones to avoid will help you get the most “bang for the buck” from your upgrade dollars.

Bonus tip: Click here for an easy way to find out exactly what hardware components are currently inside your PC.