You are here: Home / Tech News / Guess what? Your bank’s ATMs are probably running the soon to be abandoned Windows XP!
494
SHARES
ShareTweetSubscribe 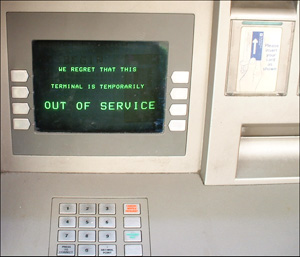 By now you’re probably aware that Microsoft is planning to stop supporting Windows XP with security updates on April 8, effectively leaving the millions of computers that are still running it after that date wide open to hackers.

What you probably don’t know is that approximately 95% of the 420,000 ATMs currently being used in the U.S. are running Windows XP!

While a large percentage of those Windows XP-based ATMs can be updated with newer hardware components that will allow them to be upgraded to Windows 7, many of them will simply have to be replaced outright.

But there’s a problem…

Upgrading the hardware and operating systems of hundreds of thousands of ATMs nationwide and replacing all the machines that can’t be upgraded is going to take quite some time. In fact, according to ATM software provider KAL, only about 15% of the country’s ATMs will be running Windows 7 by the April 8 deadline (Windows 8/8.1 will not be used).

So now for the 10 million dollar question: Will you still be able to access your bank’s ATMs after April 8? And would you even want to? I don’t know about you, but I’ll feel just a bit uneasy about using an ATM after that date unless it is obviously a brand new machine that has just recently been installed.

All of this makes me wonder whether the banks that own all of those ATMs were caught sleeping at the wheel or Microsoft sprung the impending abandonment of XP on them with little warning. Either way, it’s going to be hard to maintain a warm and fuzzy feeling whenever I find myself needing to use an ATM in the future.