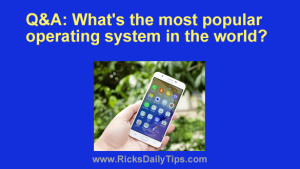 Question from Frank:  I know Windows used to be the most-used operating system of them all, but I have a feeling that might not be the case any longer. I sure do see a lot of people using iPhones these days.

Can you tell me which operating system is used on the most devices these days?

Rick’s answer:  Frank, Microsoft Windows was indeed the top dog in operating systems for a very long time, and it’s still the most-used O.S. for laptop and desktop computers, by far.

According to StatCounter, as of December 2022 (the most recent data available) Android tops all other operating systems running on any platform, and it isn’t even close.

If it seems like everyone you know has an iPhone, that could well be true because iPhones are indeed quite popular in the United States and Europe.

But here’s the thing…

While the cheapest laptop and desktop computers are still out of financial reach for billions of consumers world-wide, dirt-cheap Android smart phones and tablets are not.

As we learned from the StatCounter report, Windows machines are far from extinct in the marketplace, but their portion of the market share of all devices is shrinking by the day as more and more mobile devices make their way into the hands of consumers in developing nations.

I expect the transition from traditional computers to mobile devices and their expansion into new markets to only accelerate in the future, both here in the United States and in the rest of the world.

Bottom line: Microsoft Windows will surely continue to be a major player in computer operating systems for years to come, but its status as the dominant force in the overall marketplace is likely gone forever.