You are here: Home / Tech Questions & Answers / Q&A: Can you give me advice on choosing a new laptop?
528
SHARES
ShareTweetSubscribe 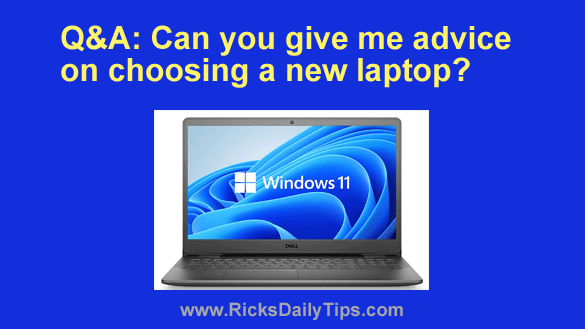 Question from Janeesa:  My company allots every employee $1000 every 2 years to buy a new laptop, and I have until January 28 to pick one out and put in the request for it.

I’ve checked out some laptops online and I’m really confused about what I should buy. Even though the company is paying for it, this laptop will be mine to keep. The problem is there are so many to choose from!

Can you point me in the right direction?

I’ll mainly be using it to work on Word documents and Excel spreadsheets, but I’ll also be doing a lot of research using Google Chrome.

Could you could recommend a couple of specific models for me to consider? Like I said, I’m at a total loss.

One more thing: I’d like to spend as much of the $1,000 as possible because I won’t get to pocket the savings if the laptop costs less than that amount. In fact, I wouldn’t mind adding a few bucks from my own pocket to get a really good laptop if I need to.

Rick’s answer:  You’re pretty lucky, Janeesa. Most companies that supply computers for their employees to use retain ownership of the machines and severely restrict what they can do with them. Your company seems to be quite generous.

Given the tasks you described above, I recommend choosing a laptop with a really fast CPU and plenty of RAM and SSD storage space.

And of course a decent size screen is also important since you’ll be using the machine for hours at a time for work.

Chances are you’ll be able to add more RAM or a bigger hard drive / SSD as needed, but you’ll have to decide on a CPU and screen from the get-go.

You didn’t mention whether you would prefer a Mac or a Windows laptop, but with a budget of around $1000 you’re virtually guaranteed to get a lot more computer for the money by going with Windows.

As requested, here are a couple of options for you to consider:

As you can see, this machine has plenty of RAM and SSD storage space for both data and program storage.

It also has a 15.6″ Full HD Display which should match the tasks you described quite well.

As you can see, this machine packs offers plenty of power and style for a price that’s fairly close to the aforementioned $1000, but you will have to add a few bucks as you mentioned.

2 – This Dell Inspiron is very comparable with the HP mentioned above, but it comes with an Intel core i7 CPU instead of the AMD chip.

It also has less RAM and SSD space, but it’s still quite powerful and easily capable of handling the tasks you mentioned.

This one also comes with a 15.6 inch screen and Windows 11 Home.

Bottom line: Those are my recommendations, Janeesa. I truly believe that either of these laptops would do a fine job for you.

That being said, I believe the HP would give you a lot more bang for the buck since it comes with twice the RAM and SSD storage space.

It would cost you an extra hundred bucks or so out of your own pocket, however.