You are here: Home / Computer Tips / How I added 4 wired Ethernet ports to my garage for only $21
1k
SHARES
ShareTweetSubscribe 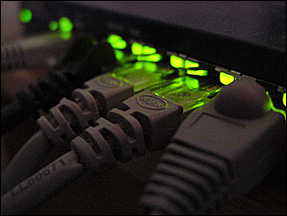 A while back I found myself needing a wired Ethernet connection in my garage. I didn’t want to spend a lot of money on the project, but I knew it would some work.

The problem is the garage is on one end of my long ranch-style house while my cable modem and wireless router are located in my office near the other end of the house.

After a bit of reflection, this is the solution that I came up with:

First, I measured the distance between the office and the garage and allowed for a few extra feet on either end for the drops. After all was said and done I discovered that a 100 ft Ethernet cable would be just long enough to complete the run with a little extra length on the ends for good measure.

I did a quick check on Amazon and found a great deal on a 100 ft Cables Direct brand Cat 6E cable (#ad). It was only $11.50 with free 2-day shipping thanks to my Amazon Prime membership. (#ad)

After the cable arrived I drilled a small hole on the corner of the ceiling in both the garage and my office and ran the cable through the attic.

I plugged the cable end that was dangling from the ceiling in my office into an unused LAN port on the router, then plugged the other end into my laptop out in the garage.

Everything worked great with no apparent loss in transmission speed even though the cable was 100 feet long. I was pleased to say the least.

Realizing that there would be times when it would be handy to have an extra wired Ethernet port or two out in the garage, I decided to order an inexpensive Ethernet switch.

I found several models on Amazon ranging in price from around $20 to around $50, but before I could decide on one I noticed a neat little Trendnet 5 port Ethernet switch (#ad) that was listed at only $9.99!

This little jewel caught my attention so I scrolled down to read the reviews and saw that there were over 1,300 of them. And the vast majority of those reviews were glowing. In fact, this little $10 switch was rated at 4.5 stars out of 5!

When it arrived I plugged the garage end of the 100 ft Ethernet cable into one of the LAN ports, then used a couple of short Cat 6E patch cables to connect a couple of PCs.

They both connected to the Internet lickity-split, and the transmission speed appeared to be just as fast as it is with the machines that are plugged directly into the router.

So there you have it. For a grand total of $21.49 I was able to extend my wired Ethernet network into my distant garage, and now I can connect up to four wired devices in there at once.

After using this cable/switch combination for a while now, I can wholeheartedly recommend them to anyone needing one or more wired Ethernet connections in a part of the house that’s a good distance from the router.

As an aside, I could have used a second wireless router configured as an access point instead of the switch to add Wi-Fi connectivity to the garage as well, but the wireless signal from the existing router is quite usable in the garage.

All I really needed were a couple of wired Ethernet ports, and the little Trendnet switch mentioned above fit the bill just perfectly.

Bonus tip: Want to make sure you never miss one of my tips? Click here to join my Rick’s Tech Tips Facebook Group.

Notes: The prices on Amazon change frequently so the prices listed in this post might not be accurate by the time you read this.