You are here: Home / Tech Questions & Answers / Q&A: Can you use two motherboards to make a computer that’s twice as fast?
818
SHARES
ShareTweetSubscribe 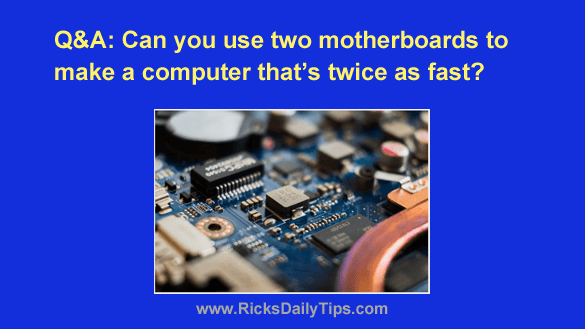 Question from Kyle:  I won a storage auction and there were four identical desktop computers in there.

I hooked them up and found they all work.

I know these are old, slow machines. That got me to thinking.

Would it be possible to install the motherboards from two of these computers in a custom case and have them work together as a single computer that runs twice as fast as one of them runs?

Rick’s answer: That’s an interesting find for a storage unit auction, Kyle. Thanks for telling us about it.

To answer your question, the short answer is a “quasi-yes”.

It would indeed be possible to use two PC motherboards operating in a “distributed computing” configuration to effectively make one dual-motherboard machine that operates somewhat faster than one of the computers would run by itself.

However, there are several factors (which I won’t go into here) that would prevent the overall computing speed from approaching anything near double the speed of one motherboard operating on its own.

But now, the long answer…

Even though the short answer to your question is a quasi-yes, the practical answer is no.

Your dual motherboard system would essentially be two separate computer systems contained within the same case.

In order you get the two motherboards and their associated components working as one distributed computing system you would have to install special software because the Windows installations running on the two machines wouldn’t be able to work together as you would need them to.

That special software does exist, but it’s simply impractical for an average PC user to acquire, set up and maintain (unless the user is incredibly wealthy and can afford to hire someone with the expertise required to do it).

By the way, there are also various “parallel computing” technologies that are in use today, but again those technologies are both impractical and poorly-suited for a dual PC motherboard setup like the one you’re interested in creating.

Bottom line: I’m afraid the only practical uses for your four desktop PCs are as four individual computer systems.